We often hear about the challenge women face in STEM, but I wonder how much we really recognize what it is? I'm a male, in a field of men. Around me what is the norm is the frequency of men, what we don't recognize is how uncomfortable this may be for somebody "on the outside." I'm not a fan of the term "micro-aggression" because I think it misdirects the dialog and doesn't help. I recognize this can be a difficult topic, but I will throw caution to the wind and dive in.

I visited a tech conference (Open West) and was pleased go with my 17-year-old daughter. She is at a school for STEM and has a passion for engineering, science, and art. I figured she'd love the conference, which began by handing out a circuit board as the badge. Attendees were encouraged to solder on LED lights and a battery — instant gratification with blinking lights. 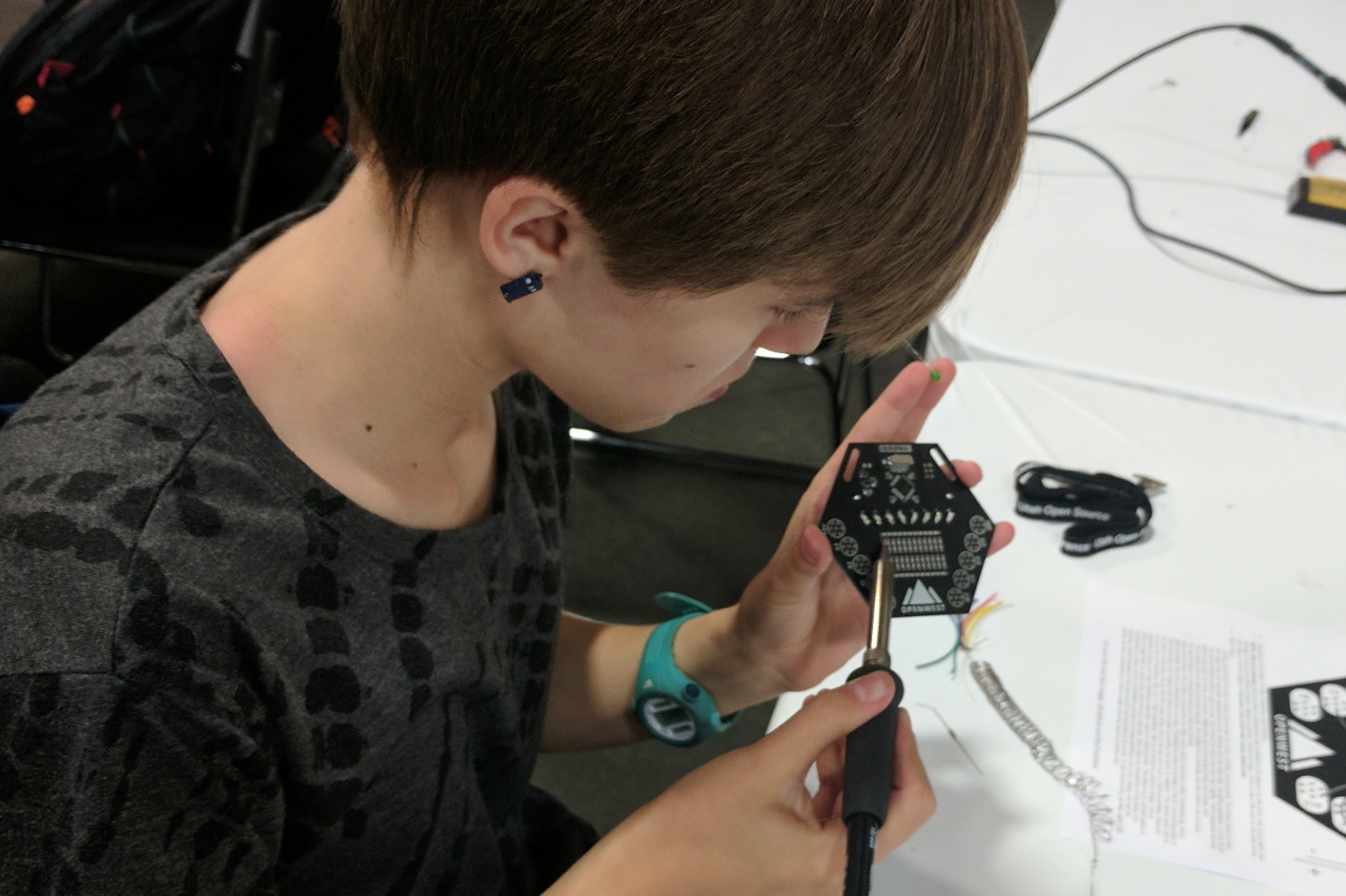 She took to it immediately, and as I tried to offer help, she made it clear, "I've soldered before, in my science class."

I smiled, recognizing her interest and trying not to be the proud dad taking too many pictures. Just one or two would be enough.

I believe everybody can empathize with feeling like they didn't quite fit. The palpable resistance one feels when you try to muster the strength to step into and join a crowd of strangers. It settles like a cold knot in your gut, with an anxiety-driven urge to just flee.

When we first arrived I noticed an empty booth for the Women in Technology. I hoped to visit with them — maybe they would have suggestions for what my daughter could do to seek a career in the STEM fields? But it remained empty throughout the conference, at least when I was passing by.

I had a talk to prepare and checked to see if my daughter had enough things to do. We discussed a few of the presentations coming up that she might like, as well as the various other activities and challenges (which can lead to getting points and more add-ons for your circuit board). But she was reluctant to go to any of them unless I was there with her.

We did sit together at the lock-sport table (a fancy way of saying here is where we pick locks for fun, see, we have put out a nice array of locks and picks to play with). I showed her how the lock pins work and how to use the tension rod in combination with a pick to get it to unlock. She assured me she would be okay and I departed to prepare my presentation.

Lunchtime arrived, and I stopped by to find she had picked two of the more challenging locks and met the goal for her circuit board add on. We talked together over a burger and fries, discussing what types of technology she liked, and I asked, "Do you like the conference so far?"

"There are too many guys."

I wanted to chuckle, but I realized what she was saying, and a part of me hurt for her. The Dad side of me wanted to grab hold and protect her.

Looking back, I realize she wasn't saying there were literally more guys than girls (although this was, of course, true). She was saying that she felt different, uncomfortable, and out of place. And that alone is hard, especially when it is in a field you really enjoy.

I decided to watch even more closely, to see how I could help her feel more at ease. We returned to the conference, and she redeemed her well-earned points for a binary clock add-on — the most complex they had to offer — and busily got to work soldering bits and pieces together.

When she was ready, she went back to the desk where somebody would program the chip. And this is where it got interesting. Previously, there was a line. But all of the sessions were in force and the crowd had thinned.

Two men sat at the desk, and for lack of knowing their names I will call them Joe and Bill. The desk was elevated, giving them a vantage position. Somebody was talking to Joe, so we approached the second guy in line: Bill. I decided to hold back so she could take the lead.

She held up her circuit board and Bill smiled, "Looks good, do you need it programmed?"

She nodded, and he gestured to his left, "I cannot help, but he can."

She said thanks and stood a bit back, waiting for the person in front of her to wrap up. As he finished, she glanced at me and hesitated. In that moment, another person stepped in front of her and started talking to Bill, and I could see her eyes tense up. She was angry for being cut in front of, as was I.

We waited, and after the second person left we were able to get the board programmed.

The reason I bring this up is it helped me to understand a bit about the problem we have in STEM. And calling it micro-aggression doesn't do it justice — that is just a symptom. Instead, it is what I would call empathy-loss.

Consider the situation at the conference circuit table: if instead, it was me waiting, the second person probably would have noticed me. I am, after all, a male and larger than my slight daughter. But this person — I'm sure he meant no harm — didn't even see her. He just stepped in front of her, oblivious to the fact she was waiting.

There are a variety of studies that demonstrate this very problem, including one summarized by Slate: Men Interrupt Women more in Tech. A few years ago Carrie Rogers-Whitehead ran a STEM robotics event and observed the girls just quietly sat in line around the robotics table while the boys kept butting in.

Our world — in STEM or out of it — is about Relationships. It is about recognizing who is around you and actually seeing them as people. Friends are just strangers we've chosen to get to know, and Relationships are about what we leave behind. I think in the STEM fields, we are already a socially awkward bunch, so this becomes an even more difficult challenge.

I also think the dialog around terms like micro-aggression and equality makes it harder. We cannot be equal — I am easily twice the weight as my daughter, and I am taller than her. We are not equal. But we can be the same. The man who stepped in front, he was not having an intent to be aggressive, and this is why I dislike the term, as it misplaces the intent. However, he was acting without empathy.

This gets to the root of the problem, which is something we can act upon. A micro-aggression is almost too hard to even focus upon, and trying to fix it is like tilting at windmills or hunting ghosts. But what we can do is be more empathetic of those around us — it doesn't matter what the gender is. We need to start seeing people as people, and treat them the same.

What can we do?

I recognize the challenge it is for somebody who is different from the norm to go into a field they love. My heart goes out to them, and I cheer them on. I also know it can only be done with great courage because they are going to face different treatment because they themselves are different. I am proud of anybody who has the courage to be different and stand out in these fields, and I encourage more to try.

In the face of this courage, I suggest we all avoid our own empathy-loss. Instead, let's try to see everybody around us as people.

And because at times one has to be overt: this means some behaviors and conversations are better left out of the workplace. You may not even notice, but your actions and words could be making somebody else uncomfortable because of your own empathy-loss. While it may feel like a group of pals at work, remember: it is work. While at work, talk about work. If you meet up afterward, talk about whatever you want. But while at work, do not talk about sexuality or other charged topics which may cause people to be uncomfortable — these just don't belong (frankly, you can extend this to politics as well as religion).

Furthermore, see past the differences people may have, and just treat everybody the same. Assume they have the capability, rather than the opposite.

Consider how to Delegate with Success. Part of that cycle is to respect somebody who has been given an assignment, let them do it their own way, and to have a feedback cycle for reporting. This is empathy, but it comes with responsibility — there is a reporting cycle as well. This cycle of delegation can work on any relationship, be it as a leader or a peer, and it works best when we have empathy and treat people the same.

If you want to learn more about the social challenges of technology and how Design Thinking can help with them, take a look at the newly released Activator: Success in Technology with Design Thinking.

DevOps is a very charged word in the industry right now. There is a lot of information and opinions available and not everybody wants to go read several books just to get an

Logs! Can it be this simple? If you have spent any time developing and administrating software services, you have struggled with the pain of dealing with logs in production. Every app formats them

Surfing the Cloud
—
The Courage of being Different
Share this